NetworkMiner Video Tutorials on the Intertubes

There are many good video tutorials for NetworkMiner available on the intertubes, so I thought I would share some of my favorite videos on this blog.

Adrian Crenshaw, a.k.a. Irongeek, is a very active guy in the network security field. He was, not surprisingly, also an early adopter of NetworkMiner. Adrian has put together a great tutorial on NetworkMiner, which is best viewed by visiting the Irongeek webpage. 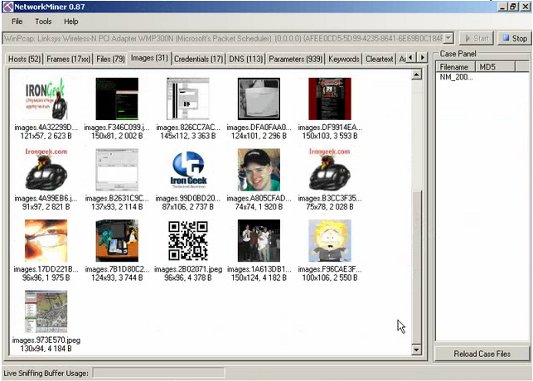 Hak5 do some great quality video productions, even though the show hosts (Darren and Shannon) might not always get all the technical details right.

In this episode of Hak5 Mubix joins the show to demo a couple of network forensics tools. Apart from showing how to access reassembled files, credentials and parameters Mubix also extracts the SA credentials for an SQL database from captured network traffic.

This tutorial unfortunately has no sound, but I still enjoy it. The tutorial shows web traffic being sniffed Wireshark and saved to a pcap file. The pcap is then loaded into NetworkMiner and various reassembled web pages are displayed. The tutorial also shows how credentials (username and password) can be extracted with NetworkMiner for unencrypted logins to the content management system webSPELL.

I alerted security@twitter.com about this flaw on May 5 2010 and got a swift acknowledgment from Bob Lord. It did, however, take Twitter several months until they had mitigated the flaw by applying HTTPS for when users re-enter their passwords on their website.

In this tutorial Anton talks about OS fingerprinting and shows how to access extracted files, images and extracted login credentials. Anton also provides a nice example of how to use the keyword search functionality in NetworkMiner.

There to this date no video tutorials for NetworkMiner 1.0 published on the Internet. I would be happy to promote such new videos on this blog. It would also be fun to see a video showing how to solve one of the many network forensic challenges available on the Internet, such as the DFRWS 2008 challenge, the Tao Security  TCP/IP Weapons School Sample Lab or any of the many puzzles at forensicscontest.com.

Some hints on what to look for in these pcap files can be found in the slides for the Network Forensics Workshop I held at the Europol High Tech Crime Experts Meeting back in 2009.

We have released a series of Network Forensics Video Tutorials, which show how NetworkMiner as well as other tools can be used in order to analyze network traffic in PCAP files.