The new features in NetworkMiner 1.6 include:

Note the NXDOMAIN responses and “No” in Alexa top 1 million column in the screenshot above; these domains are probably generated by a domain generation algorithm (DGA).

The PCAP-over-IP functionality enables live sniffing also on non-Windows machines, simply by running tcpdump (or dumpcap) and netcat like this:

To receive the Pcap-over-IP stream in NetworkMiner, simply press Ctrl+R and select a TCP port. 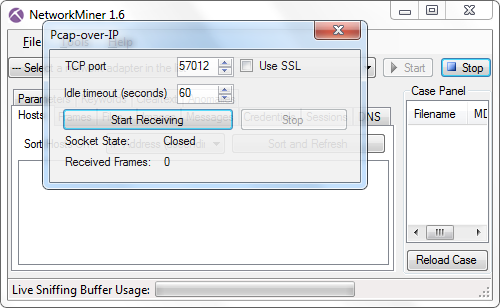 For more information about this feature please see our previous blog post about the PCAP‑over‑IP feature.

The professional version of NetworkMiner additionally contains the following improvements of the command line tool NetworkMinerCLI:

The ability to read PCAP data from STDIN with NetworkMinerCLI makes it really simple to do live extraction of emails and email attachments. Here's an example showing how to do live SMTP extraction in Linux:

The syntax for extracting emails and attachments in Windows is very similar:

The TCP ports 25 and 587, which are used in the capture filter above, are the standard port numbers for SMTP. In order to do live extraction of files sent over HTTP, simply use “port 80” as capture filter instead. Likewise, X.509 certificates can also be extracted from HTTPS sessions simply by using “port 443” as capture filter.

The most recent release of the free (open source) version of NetworkMiner can be downloaded from SourceForge or our NetworkMiner product page. Paying customers can download an update for NetworkMiner Professional from our customer portal.

We would like to thank Dan Eriksson (FM CERT) and Lenny Hansson (Danish GovCERT) for submitting bug reports and feature requests.