The latest version of our SunburstDomainDecoder (v1.7) can be used to reveal which endpoint protection applications that are installed on trojanized SolarWinds Orion deployments. The security application info is extracted from DNS queries for "avsvmcloud.com" subdomains, which is used by SUNBURST as a beacon and C2 channel.

Here's an example showing that City of Kingston, Ontario, Canada were running Windows Defender on their trojanized SolarWinds deployment back in June:

The "F9A9387F7D252842" value is the victim's unique SUNBURST GUID. See our blog post Reassembling Victim Domain Fragments from SUNBURST DNS for more info about how the GUID value is encoded into the DNS traffic.

You can also run SunburstDomainDecoder in Linux, with help of Mono, like this:

This bash one-liner indicates that the passive DNS data shared by Bambenek contains queries posted between April and October 2020.

The April 4 date here might indicate that this is when the first backdoored installer was released in the wild, but we only see SUNBURST DNS queries from a single GUID (CB28867A08967B43) on that date. The second victim doesn't appear until April 11, with additional victims starting beaconing on April 13, 14 and 15.

The first known SolarWinds Orion update containing the SUNBURST backdoor was "SolarWinds-Core-v2019.4.5220-Hotfix5.msp" (02af7cec58b9a5da1c542b5a32151ba1), which was signed on March 24. This hotfix was released publicly on March 26, according to SolarWind's Orion Platform Hotfix Release Notes. Both these dates are well before April 4, but the SUNBURST code was actually hardcoded not to start until at least 288 hours (12 days) have passed since the executing assembly was written to disk (it actually picks a random wait interval between 288 and 336 hours).

This means that an organization installing the trojanized Hotfix 5 update, when it was released on March 26, will not start sending SUNBURST DNS beacons until at least April 7. Hence the mystery GUID CB28867A08967B43, which was sendng SUNBURST DNS beacons already on April 4, is most likely not a regular SolarWinds customer.

It is also possible to use the passive DNS data shared by Bambenek, Joe Słowik and others to compute statistics of which security products that are popular among SolarWinds' customers. 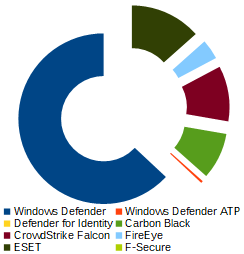 It is worth mentioning that SUNBURST does not report status for several other major endpoint protection vendors, such as Kaspersky, McAfee and Symantec, Sophos and Trend Micro.

Our tool SunburstDomainDecoder is released under a Creative Commons CC-BY license, and can be downloaded here:

You can also read more about SunburstDomainDecoder in our blog post Reassembling Victim Domain Fragments from SUNBURST DNS.