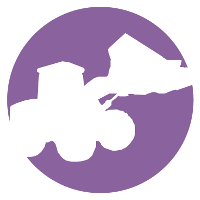 A new version of our heavy-duty PCAP parser tool CapLoader is now available. There are many new features and improvements in this release, such as the ability to filter flows with BPF, domain name extraction via passive DNS parser and matching of domain names against a local white list.

The main focus in the work behind CapLoader 1.3 has been to fully support the Rinse-Repeat Intrusion Detection methodology. We've done this by improving the filtering capabilities in CapLoader. For starters, we've added an input filter, which can be used to specify IP addresses, IP networks, protocols or port numbers to be parsed or ignored. The input filter uses the Berkeley Packet Filter (BPF) syntax, and is designed to run really fast. So if you wanna analyze only HTTP traffic you can simply write “port 80” as your input filter to have CapLoader only parse and display flows going to or from port 80. We have also added a display filter, which unlike Wireshark also uses BPF. Thus, once a set of flows is loaded one can easily apply different display filters, like “host 194.9.94.80” or “net 192.168.1.0/24”, to apply different views on the parsed data. 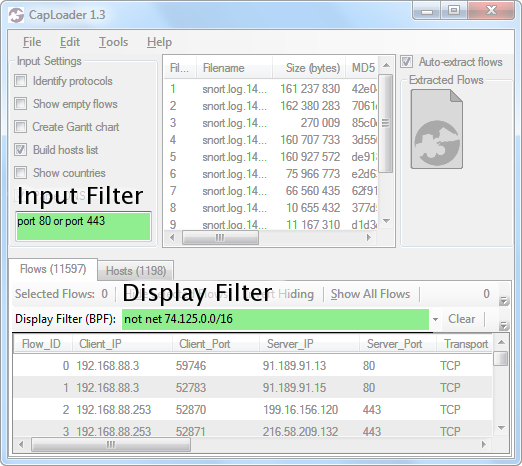 The main differences between the input filter and display filter are:

The “Flows” view in CapLoader gives a great overview of all TCP, UDP and SCTP flows in the loaded PCAP files. However, it is usually not obvious to an analyst what every IP address is used for. We have therefore added a DNS parser to CapLoader, so that all DNS packets can be parsed in order to map IP addresses to domain names. The extracted domain names are displayed for each flow, which is very useful when performing Rinse-Repeat analysis in order to quickly remove “known good servers” from the analysis.

As we've show in in our previous blog post “DNS whitelisting in NetworkMiner”, using a list of popular domain names as a whitelist can be an effective method for finding malware. We often use this approach in order to quickly remove lots of known good servers when doing Rinse-Repeat analysis in large datasets.

Therefore, just as we did for NetworkMiner 1.5, CapLoader now includes Alexa's list of the 1 million most popular domain names on the Internet. All domain names, parsed from DNS traffic, are checked against the Alexa list. Domains listed in the whitelist are shown in CapLoader's “Server_Alexa_Domian” column. This makes it very easy to sort on this column in order to remove (hide) all flows going to “normal” servers on the Internet. After removing all those flows, what you're left with is pretty much just:

Manually going through the remaining flows can be very rewarding, as it can reveal C2 traffic from malware that has not yet been detected by traditional security products like anti-virus or IDS. 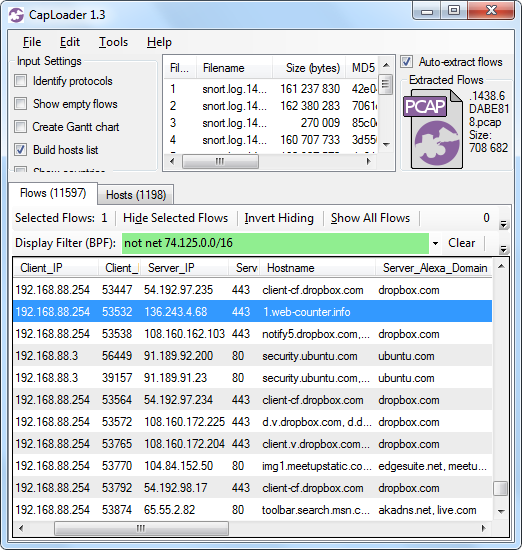 Image: CapLoader with malicious flow to 1.web-counter[.]info (Miuref/Boaxxe Trojan) singled out due to missing Alexa match.

Many new features in CapLoader 1.3

The new features highlighted above are far from the only additions made to CapLoader 1.3. Here is a more complete list of improvements in this release:

All these new features, except for the Alexa lookup of domain names, are available in our free trial version of CapLoader. So to try out these new features in CapLoader, simply grab a trial download here:
https://www.netresec.com/?page=CapLoader#trial (no registration needed)

All paying customers with an older version of CapLoader can grab a free update for version 1.3 at our customer portal.

I am a long time skeptic when it comes to blacklists and other forms of signature based detection mechanisms. The information security industry has also declared the signature based anti-virus approach dead several times during the past 10 years. Yet, we still rely on anti-virus signatures, IDS rules, IP blacklists, malware domain lists, YARA rules etc. to detect malware infections and other forms of intrusions in our networks. This outdated approach puts a high administrative burden on IT and security operations today, since we need to keep all our signature databases up to date, both when it comes to end point AV signatures as well as IDS rules and other signature based detection methods and threat feeds. Many organizations probably spend more time and money on updating all these blacklists and signature databases than actually investigating the security alerts these detection systems generate. What can I say; the world is truly upside down...

I would therefore like to use this blog post to briefly describe an effective blacklist-free approach for detecting malware and intrusions just by analyzing network traffic. My approach relies on a combination of whitelisting and common sense anomaly detection (i.e. not the academic statistical anomaly detection algorithms that never seem to work in reality). I also encourage CERT/CSIRT/SOC/SecOps units to practice Sun Tzu's old ”know yourself”, or rather ”know your systems and networks” approach.

Know your enemy and know yourself and you can fight a hundred battles without disaster.

- Sun Tzu in The Art of War 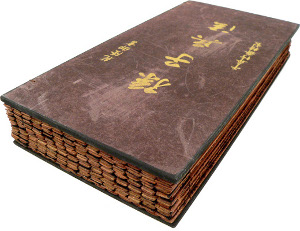 Image: Art of War in Bamboo by vlasta2


My method doesn't rely on any dark magic, it is actually just a simple Rinse-Repeat approach built on the following steps:

After looping through these steps a few times you'll be left with some odd network traffic, which will have a high ratio of maliciousness. The key here is, of course, to know what traffic to classify as ”normal”. This is where ”know your systems and networks” comes in.


What Traffic is Normal?

I recently realized that Mike Poor seems to be thinking along the same lines, when I read his foreword to Chris Sanders' and Jason Smith's Applied NSM:

The next time you are at your console, review some logs. You might think... "I don't know what to look for". Start with what you know, understand, and don't care about. Discard those. Everything else is of interest. 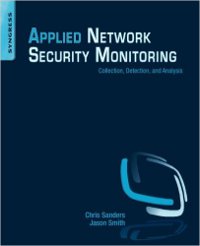 Following Mike's advice we might, for example, define“normal” traffic as:

Whitelisting IP ranges belonging to Google, Facebook, Microsoft and Akamai as ”popular web servers” will reduce the dataset a great deal, but that's far from enough. One approach we use is to perform DNS whitelisting by classifying all servers with a domain name listed in Alexa's Top 1 Million list as ”popular”.

You might argue that such a method just replaces the old blacklist-updating-problem with a new whitelist-updating-problem. Well yes, you are right to some extent, but the good part is that the whitelist changes very little over time compared to a blacklist. So you don't need to update very often. Another great benefit is that the whitelist/rinse-repeat approach also enables detection of 0-day exploits and C2 traffic of unknown malware, since we aren't looking for known badness – just odd traffic.

Mike Poor isn't the only well merited incident handler who seems to have adopted a strategy similar to the Rinse-Repeat method; Richard Bejtlich (former US Air Force CERT and GE CIRT member) reveal some valuable insight in his book “The Practice of Network Security Monitoring”:

I often use Argus with Racluster to quickly search a large collection of session data via the command line, especially for unexpected entries. Rather than searching for specific data, I tell Argus what to omit, and then I review what’s left.

In his book Richard also mentions that he uses a similar methodology when going on “hunting trips” (i.e. actively looking for intrusions without having received an IDS alert): 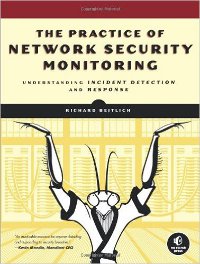 I personally find Rinse-Repeat Intrusion Detection ideal for threat hunting, especially in situations where you are provided with a big PCAP dataset to answer the classic question “Have we been hacked?”. However, unfortunately the “blacklist mentality” is so conditioned among incident responders that they often choose to crunch these datasets through blacklists and signature databases in order to then review thousands of alerts, which are full of false positives. In most situations such approaches are just a huge waste of time and computing power, and I'm hoping to see a change in the incident responders' mindsets in the future.

I teach this “rinse-repeat” threat hunting method in our Network Forensics Training. In this class students get hands-on experience with a dataset of 3.5 GB / 40.000 flows, which is then reduced to just a fraction through a few iterations in the rinse-repeat loop. The remaining part of the PCAP dataset has a very high ratio of hacking attacks as well as command-and-control traffic from RAT's, backdoors and botnets.

We have now published a blog post detailing how to use dynamic protocol detection to identify services running on non-standard ports. This is a good example on how to put the Rinse-Repeat methodology into practice.