Users of Wireshark 1.8.0 (or later) have most likely noticed that the default output file format has changed from libpcap (.pcap) to Pcap-NG (.pcapng). So what does this mean other than a longer file extension?

PcapNG is short for “PCAP Next Generation Dump File Format”. This new format isn't just an update of the old PCAP specification, but a total rewrite of the whole spec. Here are a few of the features that are available in the new PcapNG format:

You can, for example, use tshark to list all annotations in a PcapNG file with the following command:

Many tools are not yet able to load PcapNG files, instead they'll spit out error messages like “bad dump file format”. These error messages typically appear when a tool parses PCAP files with help of a libpcap version prior to 1.1.0 (you can find the error message in savefile.c from early 2010). If you instead load a PcapNG file into NetworkMiner you'll currently get the following error message:

NetworkMiner 1.4.1 with error message while trying to open a PcapNG file

If you end up with a capture file in the PcapNG format, which you need to parse with a tool that does not yet support the “NG” format, then you'll have to convert it to the legacy PCAP format. You can use editcap to do the conversion like this:

However, if the PcapNG file contains traffic from multiple interfaces with different data link types then you'll get an error message saying:

One way to convert such multi-encapsulation PcapNG files back to PCAP format is to first split the capture file into multiple PcapNG files, by using the display filters “frame.interface_id” or “frame.dlt”, and then convert each individual PcapNG file back to PCAP using editcap.

Another option is to submit your PcapNG file to the conversion service provided at pcapng.com. This free service only lets you convert file sizes up to 1MB, but it's really easy to use and you don't need to sign up or register to use it. Just choose a file and press “Convert to PCAP”, the site will then provide you with PCAP formatted capture files for each interface.

If you want to avoid conversion issues altogether then it's probably safest to stay with the good ol' PCAP format. But since dumpcap defaults to PcapNG nowadays you'll have to tell it to use the legacy PCAP format with the “-P” switch like this:

A customer recently contacted us because he wanted to load ERF capture files from their Endace probes into NetworkMiner Professional. In order to do so they would first need to convert the ERF file into the libpcap format. The obvious solution is to use editcap and specify the output capture type with “-F libpcap”. However, it turns out that by doing so the captured data in each frame will still be preceded by an ERF header. This causes a problem for tools that handle pcap files but do not have a parser for the ERF header format.

In order to convert capture files from the ERF format into PCAP without any ERF headers you need to specify not only the capture type but also the encapsulation type of the data inside the ERF headers. One way to see what encapsulation type to use is to run the Protocol Hierarchy Statistics (PHS) function in tshark. Here is what the PHS look like on the publicly available capture file erf-ethernet-example.erf:

The PHS output show that every ERF frame contains an Ethernet frame (eth). We can therefore specify the output filetype to be libpcap and encapsulation type to be and Ethernet like this:

Success! All ERF headers are now gone and the output pcap file contains plain old Ethernet frames. You can now open the pcap in NetworkMiner or whichever pcap parsing tool you wish. 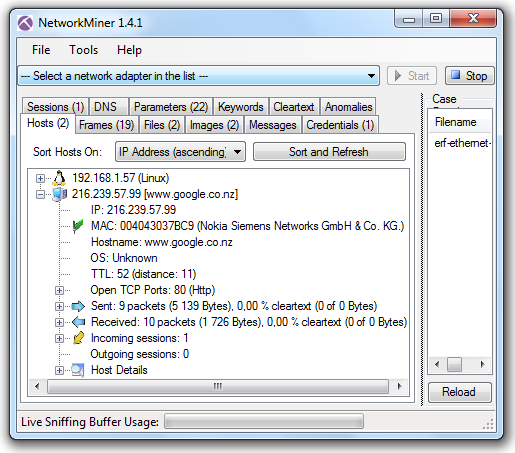 Another way to convert an ERF file to the PCAP or PcapNG format is to carve packets from the ERF file with CapLoader.