What is a PCAP file?

A PCAP file is a container for packets captured on a computer network, such as a WiFi or Ethernet network. Each packet in a PCAP file is tagged with a timestamp indicating when it was captured.

The term PCAP is short for Packet CAPture. Other common names are capture file, trace file, packet trace, packet dump and dumpfile. The PCAP file format was created by Van Jacobson, Craig Leres and Steven McCanne around 1987 as part of the work they did on tcpdump and libpcap at the Lawrence Berkeley Laboratory.

A PCAP file always starts with a 24 byte header containing the following fields:

As shown above, the first 16 bytes in the PCAP header have fixed values. There is one common exception though, which is when the field values are encoded as big endian rather than little endian. A big endian capture file typically starts with these 8 bytes:

There are a few additional magic number variants, such as “4d 3c b2 a1” used to indicate nanosecond timestamps and FRITZ!Box’s “34 cd b2 a1”, as well as big endian versions of those magic numbers.

The timezone and accuracy fields aren’t used in practice, they should therefore be all zeroes.

The link layer type defines which type of packets the capture file contains. As an example, if the link-layer field is “01 00 00 00” in a little endian PCAP file, then all packets in that file should be parsed as IEEE 802.3 Ethernet packets. A list of all link layer type values is available on the tcpdump website.

Each captured packet in a PCAP file is prefixed by a 16 byte header with the following fields:

The captured length field indicates the number of bytes of packet data that follows after the 16 byte packet header. This value should never be larger than the snap length value in the PCAP file header.

The original length field indicates the size of the actual packet on the network. This value is typically the same as the captured length, provided that a large enough snap length was used when capturing packets.

Following right after each packet header is the actual packet data that was being transferred over the network. This data is written to the PCAP file exactly as it was received, without caring about endianness or correctness of the data.

Now that I’ve covered all the different parts of a PCAP file, let’s have a look at the contents of an actual PCAP file. 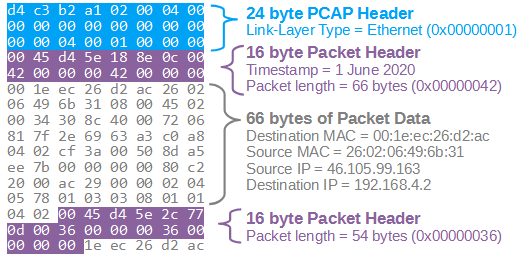 The data in the illustration above was cut off after the second packet header, but you get the idea. A PCAP file can contain an unlimited number of packet headers and packets, but there can only be one PCAP file header per file.