Forensics of Chinese MITM on GitHub

On January 26 several users in China reported  SSL  problems while connecting to the software development site GitHub.com. The reports indicated that the Great Firewall of China (GFW) was used to perform a Man-in-the-Middle (MITM) attack against users in China who were visiting GitHub. This attack was most likely conducted in order to track which users that were reading or contributing to the list of persons behind the GFW, which is hosted on GitHub.

There is a good writetup on the attack by GreatFire.org, which says:

”At around 8pm, on January 26, reports appeared on Weibo and Twitter that users in China trying to access GitHub.com were getting warning messages about invalid SSL certificates. The evidence, listed further down in this post, indicates that this was caused by a man-in-the-middle attack.
[...]
It was very crude, in that the fake certificate was signed by an unknown authority and bound to be detected quickly. The attack stopped after about an hour.” 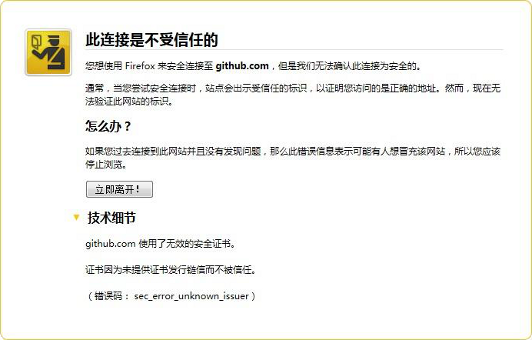 Screenshot of SSL error at github.com by @bitinn

An important part of evidence, which was used  in  the  coverage of this incident, was a packet capture file named github.pcapng that was anonymously uploaded to CloudShark.

We have no reason not to trust the reports coming from users in China, who have been victims of this MITM attack. However, in the spirit of “Trust, but verify” I decided to perform some network forensic analysis on the capture file. More specifically I set out to answer the following questions:

My first step was to load the PcapNG file from CloudShark in CapLoader: 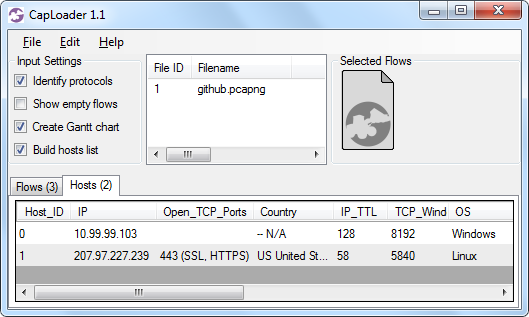 The “Hosts” tab shows that the capture file only contained traffic between two network hosts; the user's machine and the GitHub server. I also noticed that the GitHub server (207.97.227.239) had an IP TTL of 58 and TCP Window Size of 5840. This values are a typical indication of the host being a Linux machine (see our passive OS fingerprinting blog post for more details). However, when connecting to GitHub.com from here (Sweden) the same server has an IP TTL of 128 and Window Size 64240. This looks more like a Windows machine, and is significantly different from what the Chinese user got.

It can also be noted that a TTL of 58, which the Chinese user got, would mean that the SSL connection was terminated just six router hops away from the user. However, a traceroute from ihep.ac.cn (in Beijing, China) to github.com requires a whopping 16 hops. Additionally, this traceroute hasn't even left Beijing after six hops. 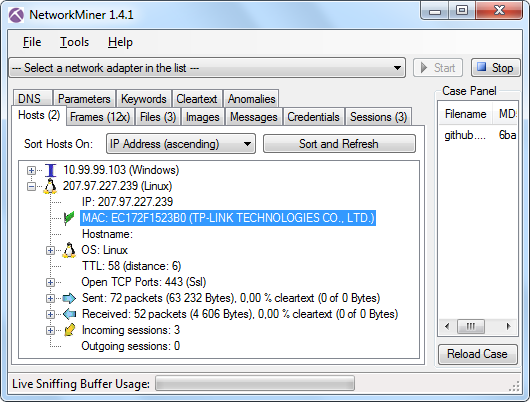 As shown in the NetworkMiner screenshot above, the Ethernet MAC address of the client's default gateway is ec:17:2f:15:23:b0, which indicates that the user's router was a device from TP-LINK. TP-LINK is a large provider of networking devices who make more than half of their sales within China. This supports the theory that the user was located in China.

As we've mentioned in a previous blog post, PcapNG files can contain a great deal of metadata. I therefore wrote a simple parser to extract all the juicy metadata that was available in the github.pcapng file that was anonymously uploaded to CloudShark. The metadata revealed that the user was running “64-bit Windows 7 Service Pack 1, build 7601” and sniffing with “Dumpcap 1.8.2 (SVN Rev 44520 from /trunk-1.8)”, which normally means that Wireshark 1.8.2 was being used (since it uses dumpcap for all packet capturing tasks).

The PcapNG file additionally contained a great deal of Name Resolution Blocks, i.e. cached DNS entries. Among these entries was an entry that mapped the IP 10.99.99.102 to the hostname “SHAOJU-IPAD.local”. So why was there a name resolution entry for an IP address that wasn't part of the capture file? Well, cached name resolution entries aren't properly cleaned from PcapNG files written with Wireshark 1.8.0 to 1.8.3 due to a vulnerability discovered by Laura Chappell.

So, who is “Shaoju”? Well, a Google query for shaoju github will bring you to the GitHub user Chen Shaoju, who also tweeted a screenshot of the SSL error he received when accessing GitHub.com. 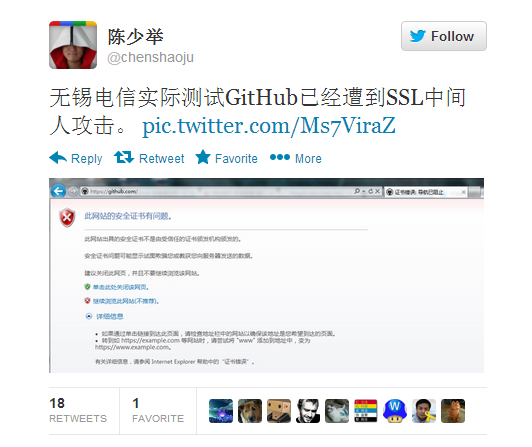 The fact that this blog post reveals the identity of the anonymous github.pcapng uploader seems to have caused some  reactions online.

I did, however, contact Chen Shaoju before publishing this blog post. In fact, I even sent him an email as soon as we discovered that it was possible to identify him through the capture file's metadata. Here's what I wrote:

“I'm working on a blog post about the GitHub pcap file on CloudShark. My analysis indicates that you sniffed the traffic. Is it OK with you if I publish this blog post?

If not, then I'd recommend that you remove the pcap file from couldshark in order to prevent others from identifying you via your pcap file.”

Shaoju responded the same day and said it was OK.

Once the text for the blog post was finished I also sent him a copy for verification before we published it online. Again, Shaoju responded swiftly and said that it looked good.

Also, I'm sure that Shaoju (@chenshaoju) can confirm that this blog post was published with his consent.

Finally, I'd like to add a few recommendations to users who wish to preserve their anonymity when sharing capture files: