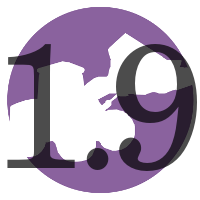 A new version of the PCAP filtering tool CapLoader has been released today. The new CapLoader version 1.9 is now even better at identifying protocols and periodic beacons than before. The user interface has also been improved to make it easier to filter and drill down in network traffic to extract interesting, malicious or unusual traffic.

We’ve added port-independent protocol detection for over 20 new protocols since the last release. The newly added protocols include some that are used by malicious tools and backdoors such as hTran, RevengeRAT, Tofsee and Winsecsrv, as well as legitimate protocols like WireGuard (VPN) and RemoteFX (UDP based remote desktop). We’ve also improved our support for ICS traffic analysis by adding protocol identification of SCADA protocols DNP3 and IEC 60870-5-104.

CapLoader also detects what we call “sub-protocols”, which are communication protocols that use other L7 protocols as transport. We have extended the sub-protocol detection in CapLoader 1.9 to include traffic like Anchor_DNS and dnscat traffic, which both run on top of DNS. We have also added detection of Cobalt Strike beacons over HTTP and HTTPS, even though the latter is quite difficult to detect due to the application data being encrypted.

CapLoader 1.9 comes with several user interface improvements that help you solve the “needle in the haystack” problem even more efficiently than before.

The context menus in the Flows, Services and Hosts tabs can now be used to select rows based on values in any column, such as “Select all flows where Duration > 10 minutes” (when right-clicking a 10 minute flow).

The “Keyword Filter” is now called “Row Filter” in order to avoid getting it mixed up with the “Find Keyword” feature. The Row Filter has also been enhanced with a new filtering mode, to complement the Contains / All Words / Any Words / RegEx options, which is called “Column Criteria”. The Column Criteria can be used to filter the displayed rows based on the values in a user-specified column. The Column Criteria “Duration > 00:10:00” will, for example, only show flows that are 10 minutes or longer, while “ASN = 3301” shows the flows going to Telia’s AS3301. 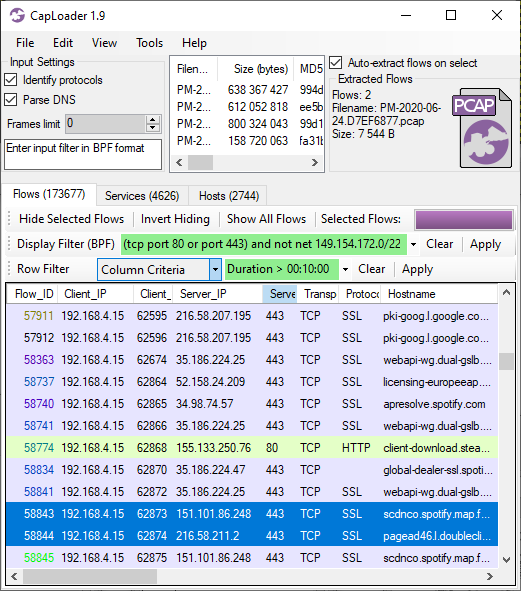 We have also extended CapLoader's BPF implementation to support VLAN id’s, so that you can use expressions like “vlan 100” as input filter as well as display filter. The BPF implementation also supports logic operators, so that more advanced filters like “(tcp port 80 or port 443) and not net 149.154.172.0/22” can be used.

CapLoader has a method for detecting periodic connection patterns, which was introduced in CapLoader 1.4. This feature can be used to detect clients that connect to a service at regular intervals, such as a beacon used for command-and-control or email client connecting to a mail server. We have improved the periodicity detection in CapLoader 1.9 so that it now detects periodic services more accurately.

The Initial Round Trip Time (iRRT) in the Flows and Services tabs is now measured in milliseconds instead of seconds in order to avoid “bulky numbers” (h/t Eddi).

There was previously a significant delay when selecting many flows at once (like 100.000). We’ve improved the performance of this feature in CapLoader 1.9, so that you can now select several hundred thousands flows at once without having to wait for an unresponsive GUI to update.

A feature in CapLoader that often comes in handy is the ability to right-click a flow, service or host and open a website with OSINT information about the clicked IP address or domain name. We have now replaced some of the OSINT services with new better ones.

Several bugs have been fixed in this new release of CapLoader, much thanks to feedback we’ve received from our users. We’d like to thank Anders Regert and Mandy van Oosterhout for reporting bugs in CapLoaders “Save As” feature. We’d also like to thank Hyun Dowon for reporting a snap length corruption bug that previously appeared when exporting flows from Pcap-NG files We have also fixed an issue where capture files were previously not always merged in chronological order when being aggregated.