Someone who says "We're gonna pull the packet captures out of the router" probably has no clue how to capture network traffic. In the Lindell case, statements like these were results of an elaborate hoax.

Nevertheless, such a statement doesn't have to be nonsense — if it comes from someone who knows how to dump the physical memory from the router. There are actually more packets available in the RAM of a router, or computer for that matter, than you might think.

The Forensic Challenge from DFRWS 2016 contains a memory dump from an SDN switch. If you drag-and-drop SDN.ram.raw from that challenge to CapLoader then you'll be asked if you wanna carve packets from the memory dump.

This packet carving feature is also available in the free trial version of CapLoader.

Clicking "Yes" in the dialogue brings up a configuration window. The default settings are okay in most cases. 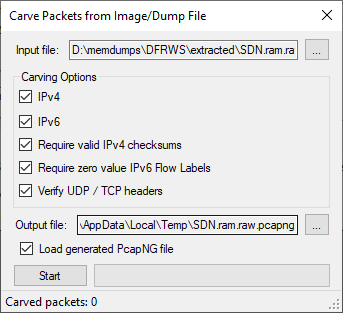 After pressing "Start" CapLoader will start identifying packets in the memory dump from the SDN switch. The packets will be saved to a Pcap-NG file located in the %TEMP% directory, unless you specified a different output location in the config window.

You can download a copy of the Pcap-NG file that I generated with CapLoader 1.9.2 here:
https://www.netresec.com/files/SDN.ram.raw.pcapng (661 kB, 2959 packets)

Here's what it looks like when the carved packets have been loaded into NetworkMiner Professional. 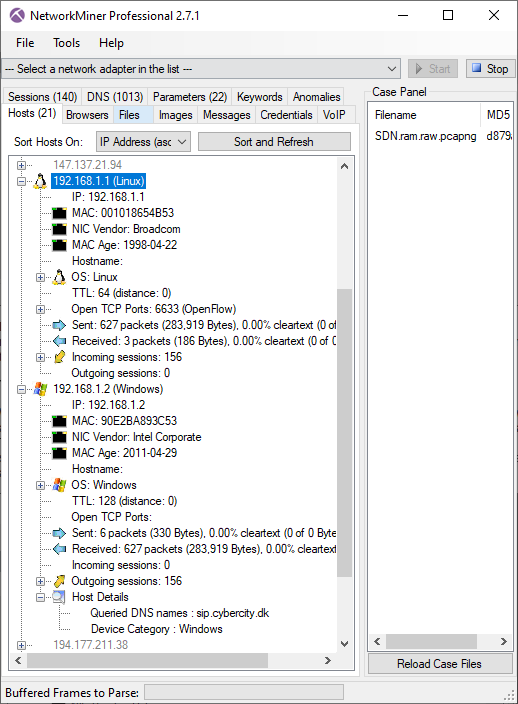 As you can see, a great deal of information can be extracted about the hosts on this network just by examining the dumped memory from the SDN switch.

What about Bulk Extractor?

Simson Garfinkel's bulk_extractor can also extract packets from memory dumps. It was actually a research paper by Simson that inspired me to implement a packet carver in the first place.

I posted a question on Twitter, asking the #DFIR community for their favorite publicly available memory dumps prior to writing this blog post, and I received lots of great answers. Thank you all for contributing! I have now compiled the following list of places from where you can download memory dumps: