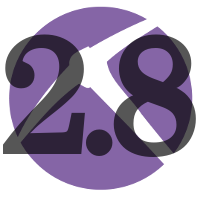 I am happy to announce the release of NetworkMiner 2.8 today! This new version comes with an improved user interface, better parsing of IEC-104 traffic and decapsulation of CAPWAP traffic. The professional edition of NetworkMiner additionally adds port-independent detection of SMTP and SOCKS traffic, which enables extraction of emails and tunneled traffic even when non-standard ports are used.

The first thing you see when starting NetworkMiner is the Hosts tab, which now has been updated to include a filter text box. This text box can be used to filter the displayed hosts based on the property fields they contain. By entering “Android” into the filter box NetworkMiner will show only the hosts having a property containing the string “Android”, for example in the OS classification or User-Agent string. Other properties you might find useful to filter on are hostname, JA3 hash and MAC address. If you’re running NetworkMiner Professional then you’ll also be able to filter on Country thanks to the MaxMind GeoLite2 feature included in the Pro edition. 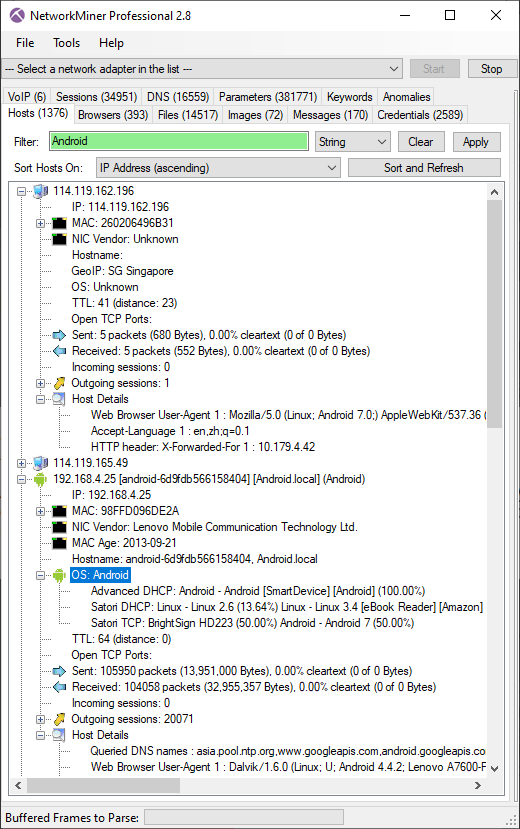 It’s now also possible to copy text from most tabs in NetworkMiner with Ctrl+C or by right-clicking and selecting “Copy selected rows”. A maximum of 10 rows can be copied at a time using the free version of NetworkMiner, while the Professional version allows all rows to be copied in one go.

The content based file type identification introduced in NetworkMiner 2.7 has been improved to also differentiate between EXE and DLL files as of version 2.8. 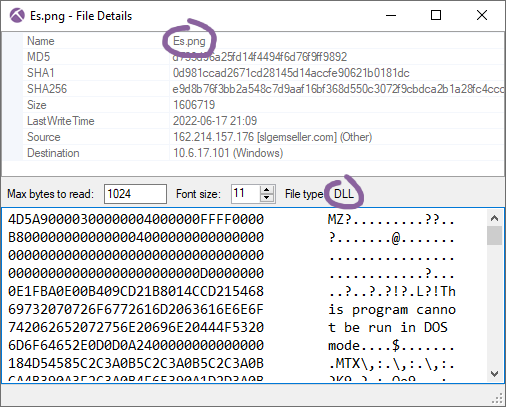 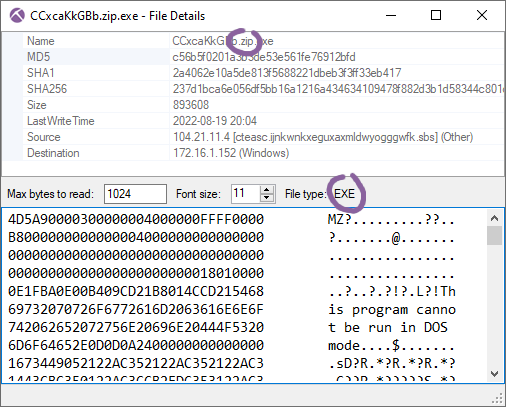 NetworkMiner’s parser for the SCADA protocol IEC 60870-5-104 (IEC-104) has been significantly improved in version 2.8. NetworkMiner now supports more IEC-104 commands and the commands are presented on the Parameters tab in a clearer way than before. 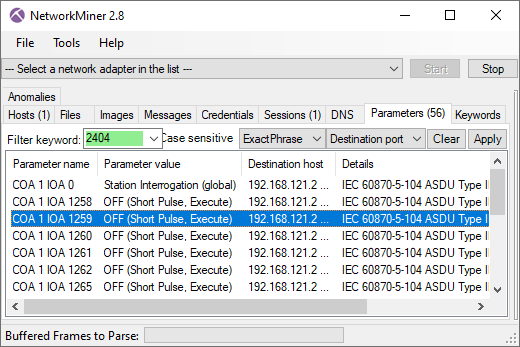 NetworkMiner 2.8 can read IEEE 802.11 packets inside CAPWAP tunnels between WLAN Controllers and Access Points. This feature allows WiFi traffic to be analyzed without having to capture packets in the air.

Reading PCAP from a Named Pipe

RawCap will start capturing packets once a PCAP reader connects to the “RawCap” named pipe, which now can be done with NetworkMiner by clicking “Read from Named Pipe” on the File menu. 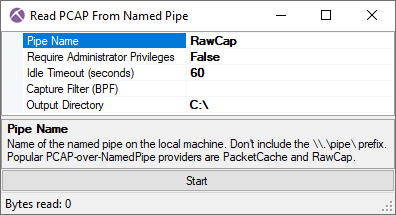 NetworkMiner previously produced incorrect JA3S signatures for TLS servers if they sent Session ID values in Server Hello messages or listed only one supported TLS version using the Supported Versions extension. These bugs have now been fixed in NetworkMiner 2.8.

NetworkMiner’s live sniffing feature has been improved to better handle huge packets caused by Large Send Offload (LSO). NetworkMiner previously crashed with an error message saying that the received packet was “larger than the internal message buffer” when attempting to capture a too large packet.

TCP sessions occasionally didn’t show up in NetworkMiner’s Sessions tab previously if the application layer protocol was unknown. This bug has now been fixed in version 2.8.

NetworkMiner Professional includes a feature for port independent protocol detection of protocols like FTP, HTTP, IRC, Meterpreter, SSH and TLS, which enables extraction of artifacts from those protocols even though the service is running on a non-standard port. This new release adds two additional protocols to the collection of identified protocols, namely SMTP and SOCKS. This allows analysts to extract emails from spam runs sent to ports other than 25 or 587, as well as to see what goes on inside covert SOCKS tunnels running on non-standard ports. 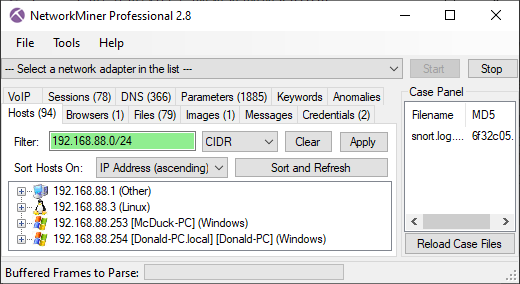 Here are some IPv4 and IPv6 CIDR filters that you might find useful:

We’d like to thank René Perraux, Matt Smith and Anand Kumar Singh for reporting bugs that have been fixed in this new release.

Users who have purchased NetworkMiner Professional can download a free update to version 2.8 from our customer portal, or use the “Check for Updates” feature from NetworkMiner's Help menu. Those who instead prefer to use the free and open source version can grab the latest version of NetworkMiner from the official NetworkMiner page.