Packet Injection Attacks in the Wild

The researchers analyzed 1.4 petabits of HTTP traffic, captured at four different locations; three universities and one corporation. Some of their findings have been made available as anonymized PCAP files here:
http://www.cs.technion.ac.il/~gnakibly/TCPInjections/samples.zip

We have attempted to recreate these packet injections by visiting the same URLs again. Unfortunately most of our attempts didn't generate any injected responses, but we did manage to trigger injections for two of the groups listed by Nakibly et al. (“hao” and “GPWA”).

We managed to get very reliable packet injections when visiting the website www.02995.com. We have decided to share one such PCAP file containing a packet injection attack here:
https://www.netresec.com/files/hao123-com_packet-injection.pcap

This is what it looks like when loading that PCAP file into CapLoader and doing a “Flow Transcript” on the first TCP session: 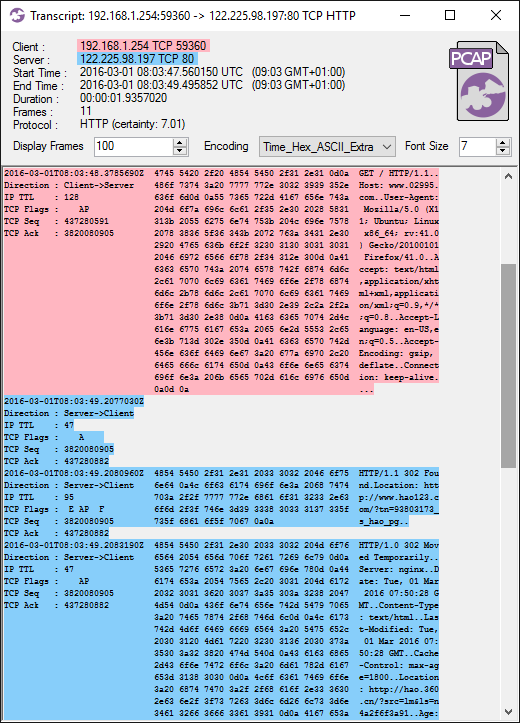 We can see in the screenshot above that the client requests http://www.02995.com/ and receives two different responses with the same sequence number (3820080905):

Judging from the IP Time-To-Live (TTL) values we assume that the first response (hao123.com) was an injected packet, while the second response (hao.360.cn) was coming from the real webserver for www.02995.com.

Since the injected response arrived before the real response the client followed the injected redirect to www.hao123.com. This is what the browser showed after trying to load www.02995.com: 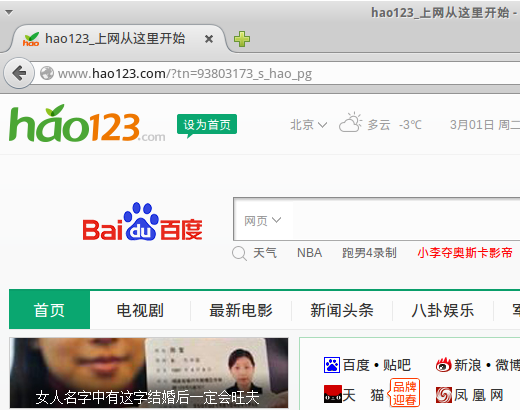 SSL encryption is an effective protection against packet injection attacks. So if the user instead enters https://www.02995.com then the browser follows the real redirect to hao.360.cn 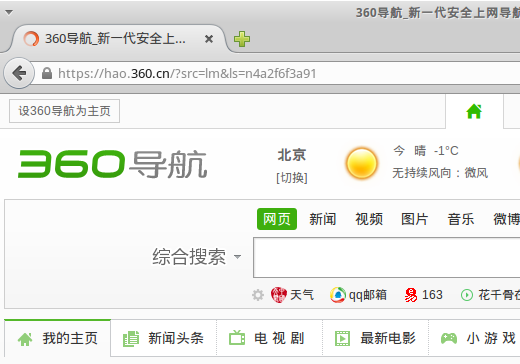 Prior to the release of Gabi's packet injection paper, the only publicly available PCAP file showing a real-world packet injection was this one:
https://github.com/fox-it/quantuminsert/blob/master/presentations/brocon2015/pcaps/id1.cn-inject.pcap

That PCAP file was released after Yun Zheng Hu (of Fox-IT) gave a presentation titled “Detecting Quantum Insert” at BroCon 2015. A video recording of Yun Zheng's talk is available online, including a live demo of the packet injection.

We have managed to re-trigger this packet injection attack as well, simply by visiting http://id1.cn. Doing so triggers two injected HTTP responses that attempts to do a redirect to http://batit.aliyun.com/alww.html. The target page of the injected responses has a message from the Alibaba Group (aliyun.com) saying that the page has been blocked. 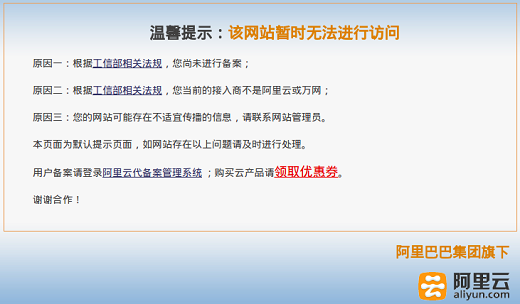 We have decided to also share a PCAP file containing a packet injection attack for id1.cn here:
https://www.netresec.com/files/id1-cn_packet-injection.pcap

This is what it looks like when that PCAP file is loaded into NetworkMiner Professional, and the Browsers tab is opened in order to analyze the various HTTP redirections: 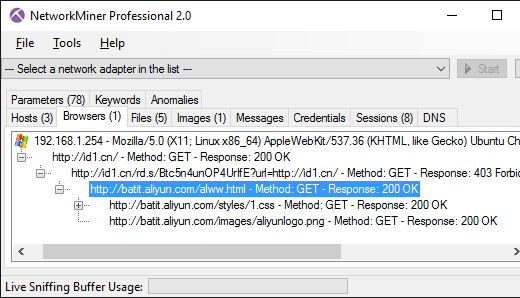 Here's a short recap of what is happening in our shared PCAP file for id1.cn:

The best way to protect against TCP packet injection attacks is to use SSL encryption. Relying on HTTP websites to do a redirect to an HTTPS url isn't enough, since that redirect could be targeted by packet injection. So make sure to actually type “https://” (or use a browser plug-in) in order to avoid being affected by injected TCP packets.

The following PCAP files have been referenced in this blog post: