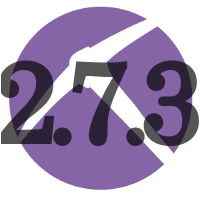 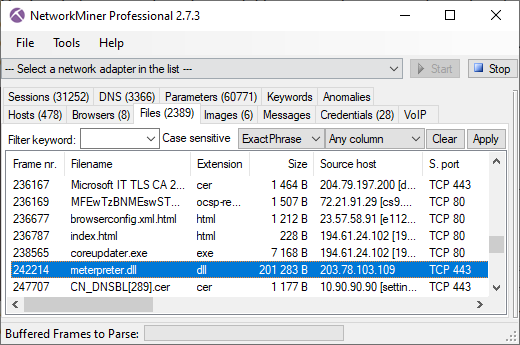 If you try to open anything other than a PCAP, PcapNG or ETL file in NetworkMiner Professional, then you'll be presented with an option to carve packets from the opened file as of this release.

The packet carver can extract packets from any structured or unstructured data, such as memory dumps and proprietary packet capture formats. NetworkMiner Pro's carver is a simplified version of the packet carving feature in CapLoader. 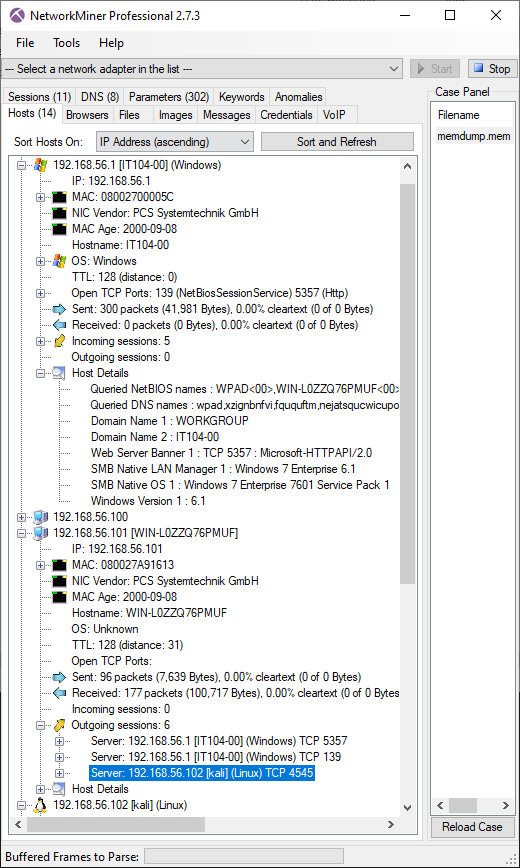 In this scenario the memory was dumped on the 192.168.56.101 host, which NetworkMiner identifies as "WIN-L0ZZQ76PMUF". The carved packets also indicate that this computer had an outgoing TCP connection to 192.168.56.102, which appears to be a Linux machine called "kali". As you can see in the screenshot, the packets carved from the memory dump also reveal a great deal about other hosts on the network, such as the 192.168.56.1 host, which seems to be a Windows 7 machine called "IT104-00".

NetworkMiner 2.7.3 comes with a local copy of the SSL Certificate and JA3 Fingerprint Blacklists from the awesome abuse.ch project. JA3 hashes and extracted X.509 certificates are matched against these lists in order to see if they are associated with any piece of malware or botnet.

Here's one example showing the default Cobalt Strike certificate being identified as "AKBuilder C&C", since that's how it is listed in abuse.ch's SSL certificate database. 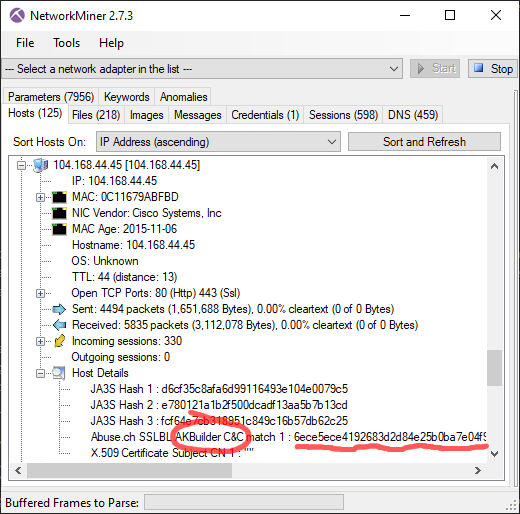 The port-independent protocol detection feature in NetworkMiner Professional additionally enables X.509 certificates to be extracted even from non-standard TLS ports, such as this certificate, which is identified as "BitRAT" with help of the abuse.ch certificate block-list. 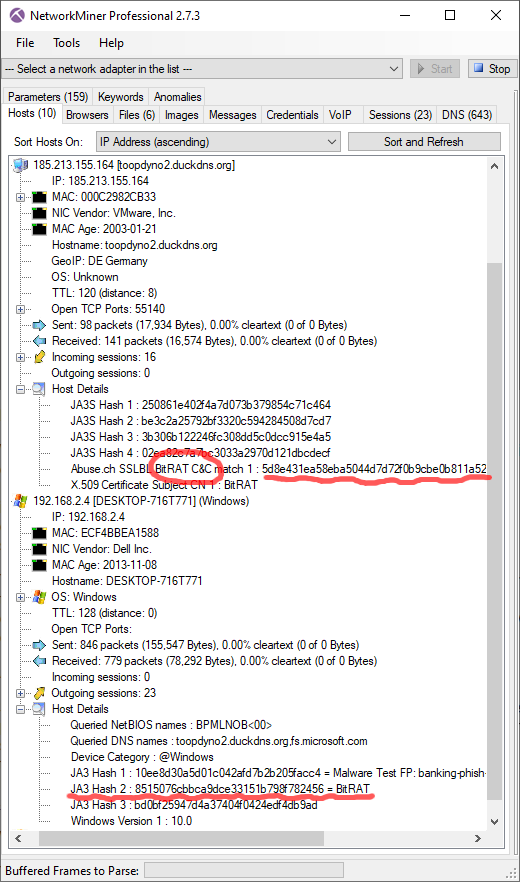 DNSBL services are used by servers handling incoming email to verify that the sender's IP address isn't a known SPAM sender and that it isn't from a network that shouldn't be sending emails.

But DNSBL services can also be used by malware and botnets, such as TrickBot and Emotet, to verify that the public IP of a victim is allowed to send emails and that it hasn't already been blacklisted for sending SPAM. We have therefore decided to add DNSBL lookups to the Host Details section in NetworkMiner 2.7.3. 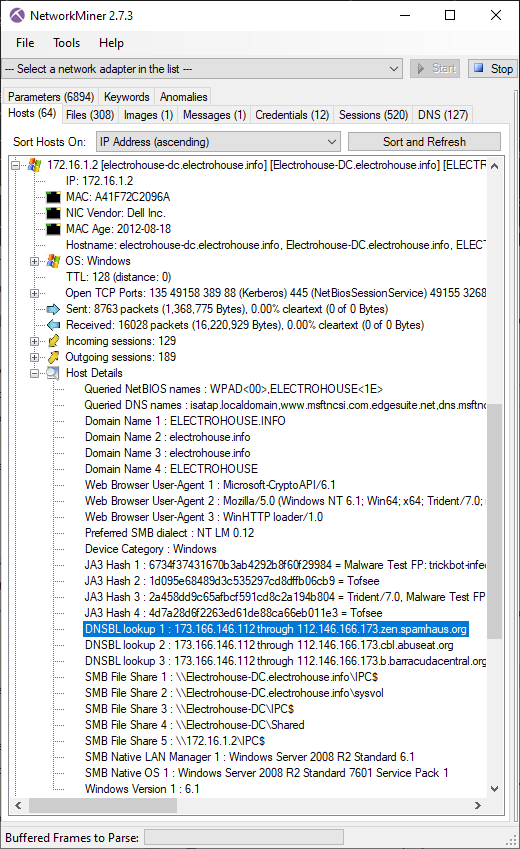 DNSBL lookups are also logged to the "Parameters" tab of NetworkMiner. 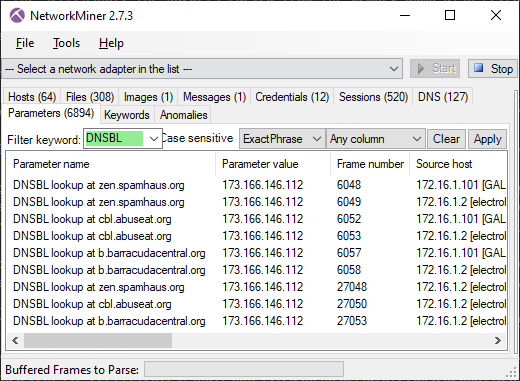 We'd also like to mention some additional new features, bug fixes and improvements that have been included in this new release.

We have also added a few new features exclusively to NetworkMiner Professional, which is the commercial version of NetworkMiner. Apart from the packet carver feature, mentioned earlier in this blog post, we've also updated the collection of OSINT lookup services available in the GUI. One of the newly added services is Ryan Benson's unfurl, which picks apart URLs to reveal data that might have been encoded into a complex URL. The unfurl lookup can be found by right-clicking an URL in NetworkMiner Professional's "Browsers" tab and selecting the "Lookup URL" sub menu.

Other OSINT services that we've added are FileScan.IO and JoeSandbox lookups of extracted files. These lookups can be performed by right clicking a file in the "Files" tab and opening the sub-menu called "Lookup Hash". 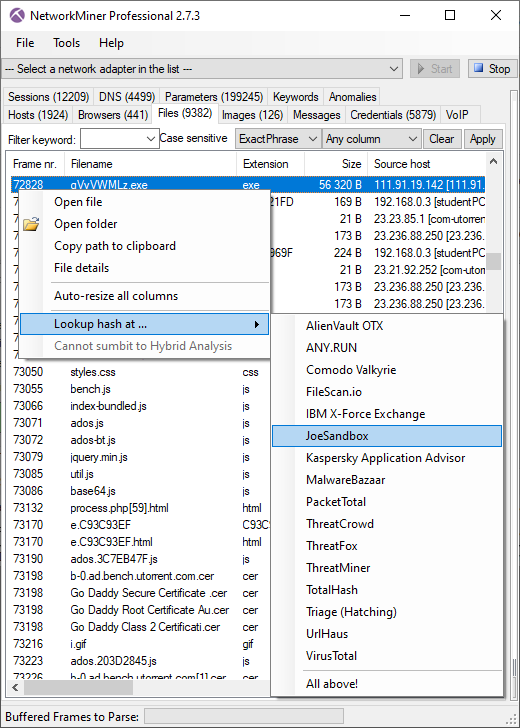 The command-line version of NetworkMiner Professional, NetworkMinerCLI, has also been updated to allow extracted information to be printed directly on standard output instead of logging everything to files. Here is an example showing this feature while running NetworkMinerCLI in Linux (with help of Mono):

The command above extracts files from a PCAP file, which contains traffic from a Windows PC infected with Qbot. The "-w" switch specifies the output directory for the files extracted from network traffic, and the "-X FileInfos" specifies that metadata for these files should be sent to STDOUT instead of being written to log files. The cut utility was used to show only the filename (column 5) and MD5 hash (column 9) of the file info output.

The MD5 hashes of the extracted files confirm that this is indeed a Qbot infection:

NetworkMinerCLI previously printed some information about the parsing process to STDOUT. That output has now been moved to STDERR in order to provide the "-X [type]" output with exclusive access to STDOUT.

We'd like to thank Michael Taggart for noticing that NetworkMiner previously failed to parse HTTP traffic to ports 3000 and 8000.

Users who have purchased NetworkMiner Professional can download a free update to version 2.7.3 from our customer portal, or use the “Help > Check for Updates” feature. Those who instead prefer to use the free and open source version can grab the latest version of NetworkMiner from the official NetworkMiner page.

This video tutorial is a walkthrough of how you can analyze the PCAP file UISGCON-traffic-analysis-task-pcap-2-of-2.pcap (created by Brad Duncan). The capture file contains a malicious Word Document (macro downloader), Emotet (banking trojan), TrickBot/Trickster (banking trojan) and an EternalChampion (CVE-2017-0146) exploit used to perform lateral movement.

Wanna improve your network forensics skills? Take a look at our trainings, the next scheduled class is on March 18-19 at the TROOPERS conference in Germany.